Lego has done brilliant job making awesome sets for our children. The best part in last couple of years is that they made a huge step forward and took popular “movie franchises” under and LEGOnised them. You can now choose among a lot of different Lego themes and categories like Star Wars, Batman, Marvel superheroes, DC comics superheroes, evergreen Disney, Spider man, Iron man, Harry Potter, Jurassic World and the list goes on.

I was a huge fan of Spider man when I was young ( note that 25 years ago there weren’t any Spider man Lego sets, you could choose between couple of huge action figures), and that is why I want to show you all Lego Spider man sets in 2019, and I must tell you they are great. Of course, I am a grown up man now, and I have small kids, and they both just love everything Lego, and this why I’m running my blog, specialized in LEGO.

These Lego sets described in this post are all made in 2019, so they are all new and there are seven Spider man sets, some of them are very small and the biggest doesn’t cost more than $50, so they are all very affordable. 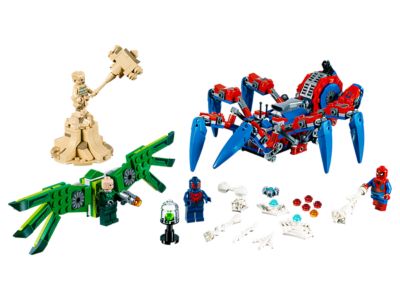 What makes this set so amazing is the main content of this set – Spider Crawler. Basically it is a huge spider robots, and very detailed as well, but it is not just that – it has a mechanism, so when you push Spider Crawler, it starts to crawl like a real spider with its legs. Mechanism is build with Technic parts, and it runs so smoothly when you push, and looks real that it is indescribable.

Vulture has like jet pack with wings on his back, Sandman has a sandbase where stolen diamonds are hidden. Beside that you get stud shooters – Spider Crawler has one the tail and it shoots web, while Vulture has as one in gun form to shoot studs.

It is a very good set with great detailed design, and it is not that expensive if you consider what you get in this set. 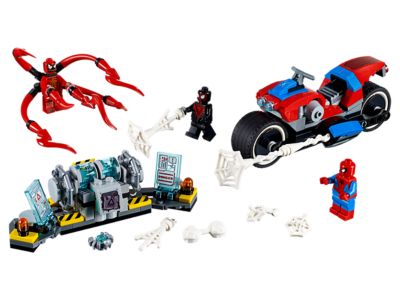 So lets start with min figures – there is a classic new, of course, Spider-man, Miles Morales ( the black “Spider-man”) and Carnage with tentacles – Carnage is (my opinion) the best looking mini figure in this Lego set.

There is Spider bike and a blowing-up generator included. Starting with Spider-bike – it looks very beautiful, very Spider-man like, although a scale between bike and Spider-man is like a human would drive a monster truck, but for children I believe it is a great thing to have a big motorcycle with a lot of details, it is just easy to handle it and play with it.

Generator is as well very detailed, and has a function to imitate an explosion, you just press a generator goes off – very cool and very playable, just imagine scenarios children can imagine playing with this set.

Very cool set, not my favorite, but if your kid loves to play with motorcycle or bike if you will ( my younger just loves bikes) it is a great option for your kid. 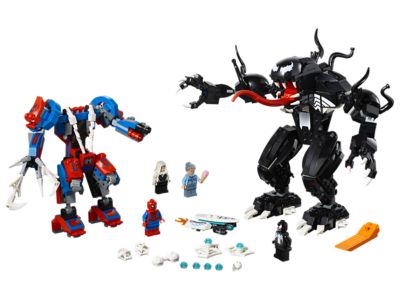 This set has 4 mini figures included: Spider Man, Venom, Aunt May and Spider Ghost with hoovering board. I have to stop right here – i really don’t understand the function of Ghost Spider – he is not in that context of battle between Mechs, or maybe he is who am I to judge right?

So there are two mechs included : Venom and Spider mech.

Let’s start with Spider Mech. It is very basic Lego mech, very similar to Ninjago Spinjitzu mech. So Spider Mech cannot move knees, all other joints are movable – rotatable. Spider Mech specialites are in its hands – one hand has a stud shooter, and on the same arm there are cool bullets or ammo to attach on a stud shooter. Other hand has a spider claw, and it is just perfect.

Venom Mech is in my opinion the most beautiful and detailed mech I ever saw in Lego. OK head stays still, but it is really frightening real look alike Venom, the whole body is just great. It has scary posture, scary rotatable claws, and it is just scary as hell. I believe kids would play with it for hours.

There has been a lot of Mechs made lately, and if your child loves mechs, than it is just a perfect gift with two mechs. 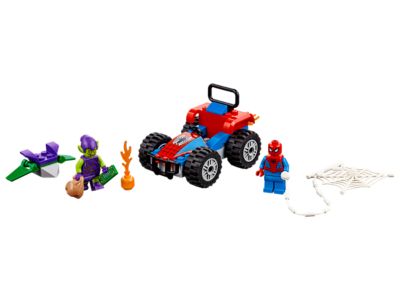 It is a very basic set with a car included, and good guy and bad guy. Good guy being Spider- Man and a bad guy Green Goblin.

This set is basic as well, although it is a little bigger than car chase set, you get a small Spider plane, dock crane, and Doc Ock’s speedboat. Minifigure in this are three – Spider-man, Dock worker and Doc Ock with robotic arm elements. 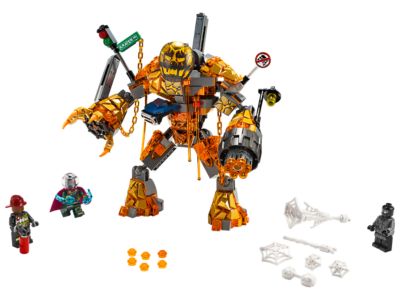 Now lets touch the big molten man – it looks funny and good as well. It has a half of car and a traffic light sticking out of it because it is molting, of course it is a Molten Man. Now the great characteristic is that it has a rapid stud shooter with six shooters. And it is design like this that you just turn this circle where rapid shooter is and it fires all six, one by one, studs in seconds. It is truly an awesome feature. And it has molten claws and can grab things. The Molten Man looks like it is molting all the time. Great set!

Cute little Spider-Crawler with classic Lego Spider-Man mini figure. My son has one.

These are all Spider – Man sets, if you like any of them, just click on the image and it will take you on the official LEGO site.

If you have any question or a comment, please write me in the comment section below and I will be glad to reply.