It was the end of November, and me any my children ( daughter and son) were checking out some clone “Lego” sets on Aliexpress ( Aliexpress is an E-commerce site, that offers thousands of Lego clone sets).

And my sonny boy saw a Ninajgo’s monastery Airjitsu ( original is huge and very expensive set, but very beautiful as well), and he started to annoy me and bug me to purchase him a “little” version of this monastery. I ordered it, of course, and I also wrote a review about it, you can click it here if you wasn’t to see how a brand named ” A toy a dream” makes and produces “Lego” clone sets, but if you are not interested, let me just sum up – it is a very beautiful set, made of 750+ parts, and when its assembled, it looks very good, and it is as well good quality.

So once I ordered a set for my son, my daughter had expectations me to order her as well a “Lego” compatible set, and of course I ordered her a set as well. I ordered her a nice princess pink carriage form YNYNOO brand.

But I didn’t finish there, I had to order one more for “myself ( I was just curious how good YNYNOO brand is- there are a lot of good reviews about YNYNOO brand on Aliexpress, and reviewers are basically people from all around the world) – and the set I ordered was Star Wars buildable figure – Clone commander Cody ( 82 pieces).

One big con I have to emphasize – the delivery took well over 2 months, so I already guessed it won’t happen, delivery, but eventually happen, when all euphoria about new sets was gone – but if we pick good from bad – guess how happy children were once sets arrived, undescribable. 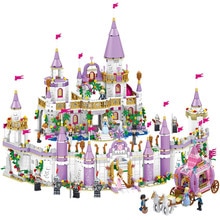 I wrote couple of posts on “fake Lego brands” and those are:

First I will write about a carriage in this post and second coming Star Wars buildable figure, Let’s begin!

All “Lego” knock offs always arrive without its boy, and here no exception with this set as well. It is wrapped in Post’s bag/envelope.

So when I unwrapped a set 7 bags fell out with instructions as well. Firstly I didn’t know which brand actually is, because in instructions are some Chinese letters and two words “ZHE GAO”, and I started to check for a ZHE GAO brand, but there isn’t any I suppose. So I contacted a store owner and asked him to tell me which brand this set they sent me actually is, and the store owner replied almost immediately that it actually is a YNYNOO brand set.

Bags were unnumbered, so I had to open all bags in order to build a carriage. But at least they are packed systematic – look a like part are in the same bag, so looking for a certain part wasn’t too long, except when some particular part was starting to run out – then a search for some part was a bit longer.

At first, when you start to build a set, you build all three mini figures – there an odd mixture of them – there are two, a princess and a prince, figures, that are like Lego friends figures, and the carriage driver that is evergreen basic Lego figure with a whip.

Afterwards you start to build a carriage. As you can see on the picture, I unwrapped all bags and separate content of bags to its own place, so I wouldn’t mix it up – I have now some experiences with Lego knock offs, and I know, and I believe you should know as well that you must not mix content of bags together – you just get lost and you spend most of your time just searching for the proper part.

Let’s move further – I had problems at the beginning – one of the base plates for a bottom of a carriage came a little bent – I understand it is quite big base plate, and delivery form China to Europe took its tool, but it wasn’t so serious that I couldn’t proceed, it was a minor bug at the beginning, but then everything was OK.

So first you build a bottom of the carriage and then a cabin for a prince and princess. You proceed very fast, nothing complicated about that.

When you start to build an upper half of a carriage and an exterior of a carriage, it becomes tricky. There is nothing hard about assembling it, it just the fact that there are four pillars you have to build together, and there are basically just 1×1 studs or 2×1 studs, and they aren’t as Good as Lego’s pieces are – attachments are not so firm as Lego’s, so I had a lot of crashes of pillars. And when you finally assemble all pillars to stand – then instruction tell you to build vaults in interior of a carriage, going side by side with pillars – I became quite angry because of course pillars collapsed again.

Eventually I managed to build and everything stood still, and then you fix it with a roof and there are no more bugs until you end building it.

Final carriage is very beautiful, pinkish, with two horses, and is almost big as regular Lego’s house – I mean it is huge. Of course my daughter was pleased with a set and very happy.

Where to buy: Aliexpress

To be honest, I can’t tell you either to buy it or not, depends on what you are looking for. From my experiences, themes that are not Lego’s, so the ones that are not copies, are not as sophisticated and greatly designed as Lego’s that is for sure.

But on the other hand, you know you are not affecting Lego company because it is not Lego’s original set, so the brand you bought a set from had to make and create their own set with its own money. About legality of using the same parts as Lego is not immoral – Lego’s patents expired 9 years ago, so there is nothing wrong with it.

And one more huge pro goes to its price – it is only $10, and for 10$ it is a great quality, to be honest one of the best I tested thus far. It is your choice, I’m just talking about it.

set came in a postal bag as usual all “Lego” clone sets came from China.

When I unwrapped it one bag fell out and instructions. I had to order this figure because couple of moths back I ordered clone Star wars buildable figure, and it was general Grievous – and it was huge, not so good but good enough figure I received. 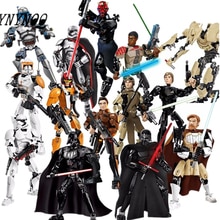 It was too big for my son to play with it, and I still don’t know if I mixed some parts, or it was just bad quality of particular parts because where its spine was, the attachment of the whole upper body kept getting unattached, and it drove me crazy, but there again I didn’t do anything about, I don’t even like it to be honest.

That is why I decided to order new Star Wars buildable figure. At least I know that YNYNOO produced clone commander, because with General Grievous I didn’t get any information of who made it.

There are just 82 parts in this set so I finished with it in about 10 or 15 minutes something like that. It is a very easy set, and when I assembled it, my son grabbed it and started to play with it – it has all attributes a kid require – it is big enough but not too big, his arms, legs, joints are fully movable, it reminds children of a robot, and has a gun – what else could they ask for right?

AliExpress.com Product – Star Wars Buildable Action Figure After that you put shield or Armour on it, then you build space gun, that is awesome to look at it, and at the end you put its head/helmet on, and you are done – awesome as hell.

Where to buy: Aliexpress

What else can I tell you about it? if you want to buy it, please just buy, it is officially my favorite fake Lego set I laid my hands on, and I will definitely order more of Star Wars buildable figures in the future. Very cheap, good-looking and easy to manipulate with it, what else can you ask for?

Beside Bela brand and A toy a dream brand, YNYNOO is the brand I will order form again in the future, I’m convinced that some fake brands and alternative brands as well, are actually quite good. I have some experiences with clone brands, and Let’s put like that – ones that are worth to mentioned, are described in reviews in my posts. This is actually my number three Lego clone review post I wrote, and I bought until now at least 20 different brand sets, and except these three brands until now, all other were just painfully bad, honestly. That is why I started to dig and analyze which ones should be plausible, and the fact that there are so many of them, it took me quite some time, but I will investigate right until I will cover all fake brands.

If you have any question or a comment, please write me in the comment section below, and I will be happy to reply.