Lego this year has launched so many very good and very interesting sets – it is like you must have it. And they have license to all these different movie franchises like Batman, Spider man, iron man, all Marvel superheroes, DC comics superheroes, Star Wars, Disney princesses, Harry Potter and list goes on.

They also have their own “brand” that is very popular and I must say it is very fun and has some great designs – of course we are talking about Ninjago!

Ninjago is with us for a couple of years, but this year Lego beat themselves with some really good sets. Now my favorite sets of Lego Ninjago are definitely all three Dragons – they are big and they are dragons – how cool is that for a kid to play with.

So in this article “the best Lego Ninjago sets in 2019” I will present you my favorite Ninjago sets that were made this year, so in 2019, and of course they are all new.

We don’t know much yet about this set, al I know is that this cobra-like-rattle snake, a Fire fang is a very cool thing and attractive to play with. It has a moving tail with two stud shooters. You get four mini figures and weapon accessories. I believe it is a great Lego set to have.

Now this mech is one the most beautiful mechs Lego ever made. It is huge green-white-golden ninja mech, with fully movable arms, and the hand with fingers can actually grab a sword, and it looks like more human hand than a mech’s hand, so they done an excellent work. Legs on the other hand is like most of Lego mechs non movable in knee area, with fully movable joints in hips and in ankles.

One cool thing about Titan mech is that it has some kind of wings on the back, which are detachable, and they become a flyer for a minifigure with wings – cool as hell.

So beside mech and weapon accessories you get brand new mini figures with great new appearances.

First of all, there are 9 mini figures in this set – quite a lot.

Land Bounty is actually a big truck, it kind a look like a cool pirate ship on wheels. So this “truck” has steering function, shooting cannons and detailed interior.

There is one great feature to this giant Lego ninja truck – it has a detachable flyer with cockpit for two mini figures, stud shooters.

Don’t forget – it is a huge set with a lot of pieces, so it is a very beautiful, giant truck with a lot or attractive details. 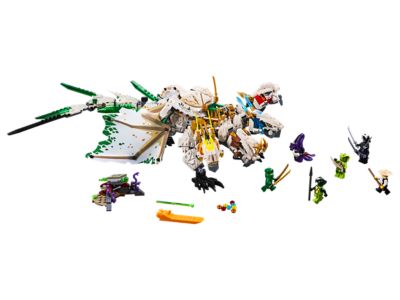 Like I said before, I’m just crazy for dragons, so this set is my favorite yet in Ninjago series. Why is that so? Let me tell you- it is not just a dragons, it is truly a monster four headed dragons, and it is long more than half a meter, so imagine how big is it. This Ultra Dragon has four features, I need to point out – it has four heads with a stud shooter in every head, a whipping tail you handle, unfolding wings, and extra handle to flutter wings and fly out.

Beside dragon there a 6 mini figures included in this set.

Lego Ultra Dragon is definitely my number one pick for Ninjago, and if you are considering whether getting it or not – it is big yes – go get it.

So I thought who would ever buy spinjitzu, I mean they seemed dull to me, and I even didn’t give them chance to catch my focus. But I had to finally check out what is all fuzz about spinjtzus – let me tell you, they are really great fun to play with. Well but first of all – you need at least two fight with each other, if you have one it is only a Lego spinner.

More you have, bigger the tournament becomes.

It goes like this – every spinjitzu has three modes you build – a defense mode, attack mode and speed mode. And you have some kind of Lego twister minifigure is attached in it, and you just detach it from one mode and attach it to another mode. So if you have more spinjitzus, you spin them, let them go and wait until they clash one watch and cheer how to battle is going to end. So it is like a duel kind spinner Lego thing. Very impressive.

Before I had children, I did’t get much attention to Ninjago theme, it seemed like pointless sets of ninjas. But now that my son is big enough to play with Lego ( disclaimer – he is only four years old, so all the fun building sets falls on me, which I’m very glad for ), Ninjago sets and mini figures are the best for him to play with.

Remember when you were a child, what was one the best things you played? I know the answer – ninjas, and catanas, and samurais, and battles and everything around that theme. Watching them play with Ninjago is just priceless.

If you have any question or a comment, please write me in the comment section below and I will be happy to reply.